Using your cell phone for charity.

Giv Mobile's parent company (PTel) went out of business, taking this service down with it as well. The website now re-directs to the PTel page which merely shows ads for other cell phone plans.

You know what happen whenever there a flood, earthquake or other natural (or man-made) disaster. The cell phone companies set up a way for you to donate ten or more dollars by sending a certain text. Later the $10 charge appears in your phone bill. Well, that is often not possible when you have a no-contract or prepaid phone. But now there’s a better solution. What if you could donate a small amount steadily before disaster strikes? That's what this plan offers.

The plan relies on the T-Mobile network.

There are five no-contract plans which offer unlimited talk and text varying amounts of data ranging from $20 to $60 a month. The $20 plan offers 250 MB 3G/4G data. The $25 plan offers unlimited low-speed (2G) data - that's a weird one. The rest of the plans offer 1GB, 2GB or 4GB of high-speed 4G LTE data.

Their Giv PayGo plan costs 2 cents per text, 5 cents per minute and 10 cents per MB.  You can use it with a smartphone or a feature phone. If you use it with smartphone, then make sure you know the setting for turning on and off your mobile data.

There’s a decent selection of smart phones. You can even get one free (Blu Advance 4.0) if you pay for two months unlimited service up front and enroll in autopay.

For a few dollars more you can get brand name phones. The best deal at the moment is actually available through a site called Stack Social.

You can get a Huawei SnapTo handset plus one month of unlimited service ($30 value) for $99. 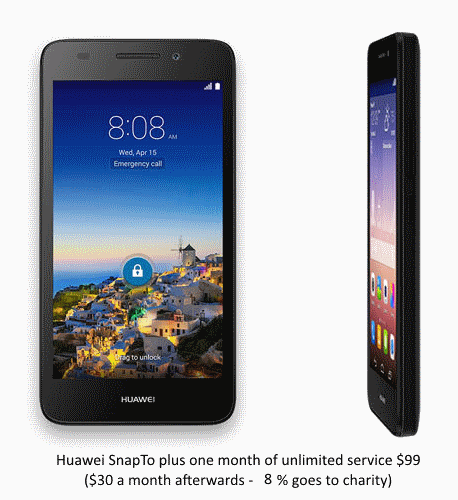 The SnapTo has the following specs:

There’s a good selection of charities in the areas such as Health, International Relief, Arts and Sciences, and the Environment. You can choose up to three charities to divide your contribution. At eight percent that gives you $3.20 to dole out on the $40 plan, and $4.00 on the $50 plan.

If you want to check out the individual organizations, you can go to Charity Navigator where they evaluate their tax filings and give them a grade.

If you want to devote a portion of your cell phone payments to charity and have good T-Mobile coverage in your area, give Giv Mobile a try.