PTel sent out notifications around January 23rd (thanks Don!) that they are shutting down on January 31, 2016. You have until February 5 to port your number. They have been working with several providers that use the same T-Mobile network to help ease the transition (and make porting your number faster).

The following information will be kept for reference purposes.

5 Cents per Minute or Unlimited from $20 Per Month

PlatinumTel offers a great prepaid plan based on the T-Mobile network. Their pay-as-you-go plan costs just 5 cents per minute for calls, 2 cents for texts, and 10 cents per megabyte of data.

They also have monthly unlimited plans starting at $20 per month.

All their monthly plans now include more data starting with the $20 plan which now includes 250MB data along with unlimited talk and text. 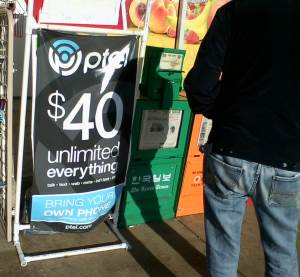 They have also re-branded themselves as PTel, although the actual company name remains the same.

But before we get ahead of ourselves, let's take a look at their coverage.

Coverage is on the T-Mobile network for all current plans.

The old plans used to be on the Sprint network. These older plans were maintained for about six months during the switch-over, but are no longer available.

So here are the current plans.

Pay As You Go Plan

The Real PayGo plan is not only easy to use but designed to be simple to remember as the 2 x 5 x 10 plan. Calls cost 5 cents per minute. Text messages cost 2 cents each even for international texts. Data costs 10 cents per megabyte and picture messages costs 2 cents not counting the data.

One thing you don’t want to do is call 411 directory assistance, because that costs 50 cent plus the airtime used during the call. Note this actually better than the $1.49 cost under the old plan. (If you need a number just call one of the free directory assistance services like 1-800-FREE-411.

You can refill your airtime online in bundles of $10, $20, $30, $50, and $100. The great thing is that the rates don’t change depending on the refill card as they can with Gophone, T-Mobile prepaid, or Tracfone plans.

The $10 refills is good for 60 days. So it’s possible on this plan to pay just $10 every 60 days (about two months) if you just use your cell phone for emergencies. That can work out to about $60 a year! Of course, most people will use the phones more than that.

As mentioned above, here is the new line-up of unlimited plans. All these monthly plans also include unlimited international texts.

The rest of the plans offer varying amounts of high-speed 4G LTE data:

All plans except for the $20 plan also offer increasing amounts of international dialing credits.

Here is the full line-up::

While it's a fairly long list, you can see that they're not the latest phones except for the Galaxy S5. You can get an unlocked GSM phone separately if these don't appeal to you.

Older CDMA phones like the the Sanyo SCP-3810 are no longer available on their website and are not compatible with their current network.

With the shift to a GSM network, you can now get a PTel SIM card and use it with your own unlocked or T-Mobile compatible GSM phone.

You order the new phones or SIM cards directly from PlatinumTel, and they will ship them via UPS in the continental US and via USPS in Hawaii and Puerto Rico. (There’s no coverage in Alaska.)

PlatinumTel is headquartered in Chicago and has distributors across the United States.

I haven’t called their direct customer service myself. However, I am encouraged that they also do online customer service via the Get Satisfaction website. The CS staff answer questions there, and they respond to customer requests.

They have a responsive Facebook page where they answer questions pretty quickly. On that page, they have a Airtime PIN puzzle every week. The first person to figure it out the airtime PIN can use it to add it to their account.

Note: This happened when they were on their old network (Sprint). I don't know if they allow it on their current network (T-Mobile).

Tethering allows you to connect your PC to the internet using your cell phone connection. PlatinumTel like most cell phone companies these days, initially blocked tethering. These carriers do this, because they don’t want to lose the opportunity to charge you for yet another service.

After a few requests on their customer forum, PlatinumTel decided to enable tethering on a trial basis. This means you can now connect your laptop to the internet via your cell phone. For a prepaid provider, it’s not such a big deal, since you are using your paid airtime. Still I was impressed that they made this change to satisfy their customers.

They also have an active Facebook page where they interact with their fans and offer an Airtime PIN puzzle to solve every week. The first to solve the puzzle gets to add the Airtime PIN to their balance.

If you have good coverage in your area, you can certainly give their Pay-As-You-Go or Unlimited plans a try.