The Tracfone Motorola EX431g is a compact QWERTY keyboard phone with a 2MP camera, music player, FM radio and 3G web browser. Thing that’s striking about it is its compact form factor and slightly nicer finish. So let’s start with its physical appearance.

This  squarish phone has a smooth matte black finish. The back is neither hard nor rubbery but somewhere in between. It does have a slightly high-end feel to it initially, though I don’t know how it will fare over the long haul. 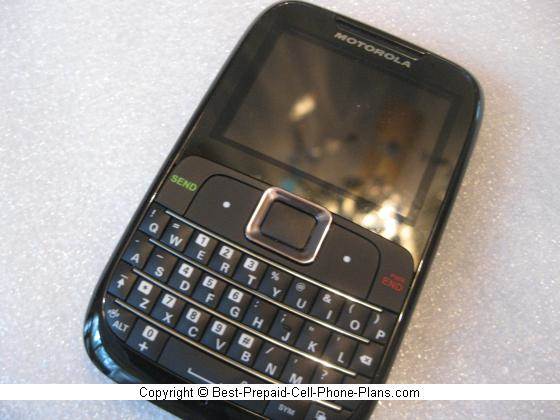 The display seems to have a higher quality than the previous Motorola Tracfone (EX124g). The icons on the screen look sharper and more polished.

However, this has unfortunately allowed Motorola to use a smaller, thinner font making it harder to read for older eyes. Amazingly, you cannot change the font size of the display so you youngster don’t have to worry about grandpa using your phone unless they’ve had laser surgery. 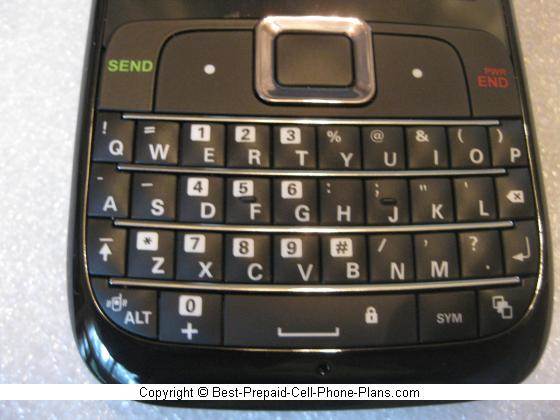 Again, due to the compact size, the keys on the QWERTY keyboard are small and close together. I was able to use it via the nails on my thumb. The texting display is quite nice with black letters on a gray background. Note, that texting costs 0.3 units on this Tracfone. 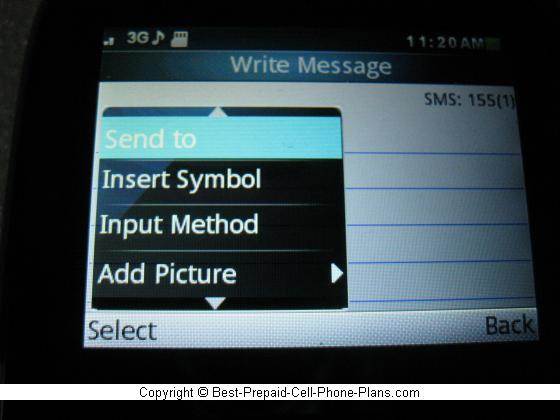 You can insert pictures, audio or video into your messages. 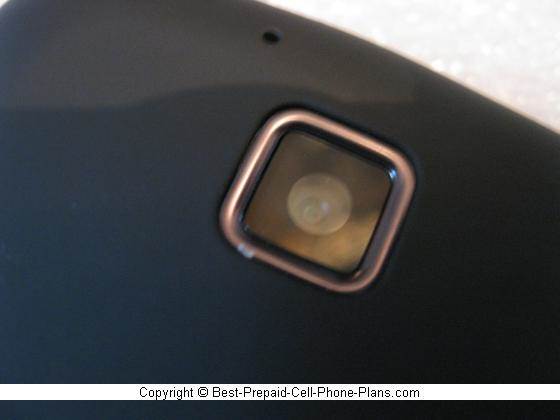 The Motorola EX431g has a camera/camcorder which takes 2 MP photo and 480 x 320 (HVGA) videos. The video resolution is actually better (I think) than what’s available on the LG 840g and Samsung S390G. There is no dedicated camera key, but you can re-assign one of the navigation keys for quicker access.

The camera’s default resolution is set at 1 megapixel, so you do have to go in and change that to 2 MP to get the best pictures. You might have to do the same for the camcorder. 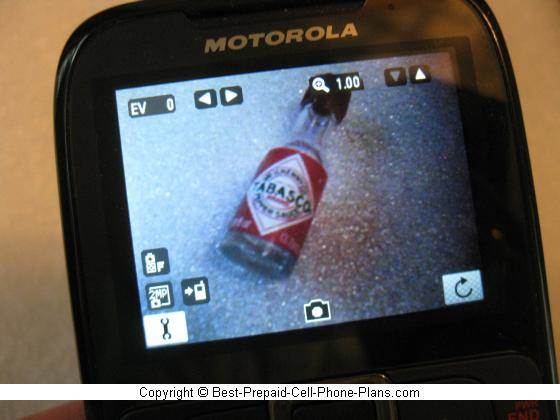 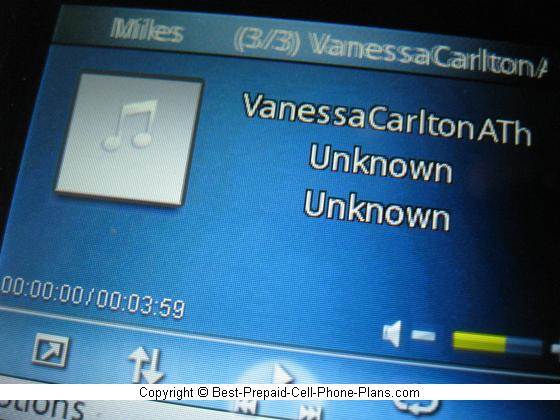 You can view the photos, music and videos via the phone’s Media player. You can listen to your music in the background while walking or texting. On the home screen, the track that’s currently playing scrolls by horizontally.

The only drawback I’ve noticed is that you cannot adjust the volume once the keypad is locked. So if the phone is in your pocket or purse, you have to take it out, unlock the screen and then turn down the volume. This is also an issue with the radio. 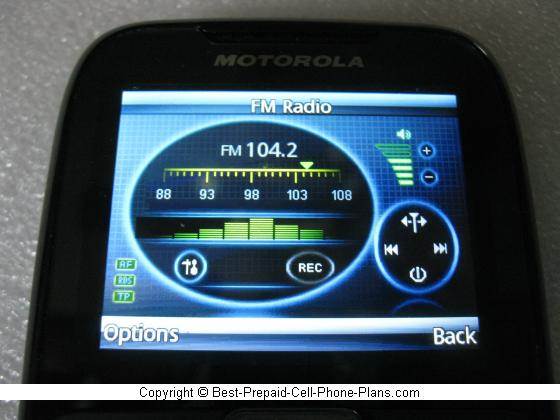 The FM radio has an “old school” look with rounded interface meant to remind you of those old radios you now see only in movies or on TV. You need a headset to listen to the radio.

I found the reception somewhat weak. In response to a similar situation with the EX124G, one reader had earlier suggesting using a earbuds that also come with a mic for better reception (from the third wire).

The radio itself is quite good. It has RDS which displays the current station and what show or track is showing. This information is also presented on the home screen if you’re playing the radio in the background.  You can stop the radio from the home screen by pressing the end button (after unlocking the screen).

The radio also has AF (auto-frequency) control which allows the radio to tune to the strongest nearby frequency for the same station. There is even an Auto Traffic service setting – although I didn’t get a chance to actually experience this aspect. Pretty impressive for a prepaid phone right?

All these files can be stored on a microsd memory card. The slot for this is behind the battery and looks slightly different from what you may be used to seeing. However, the card slides in without a problem. Getting it back out is easy as long as you press down on the plastic retaining tab.

One thing I found out while putting in the memory slot, was how to remove the battery cover. I had a devil of a time, until I realized there is a gap between the cover and the body in the upper right hand corner that has a place for the lanyard or strap. 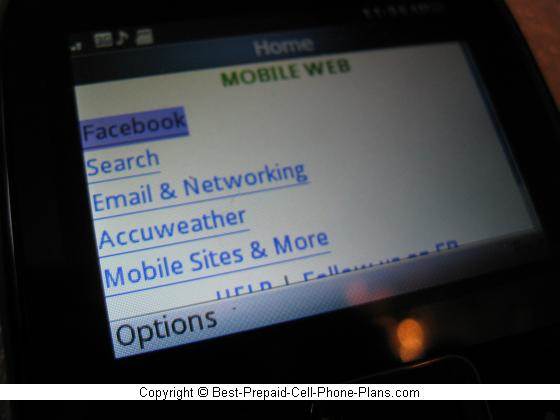 As I noted in my review of the LG 840g, I’m not so thrilled about having a 3G web browser on a prepaid phone where your airtime is charged by the kilobyte. Sure the web pages load fast, but your minutes disappear fast, too.

For example, I spent about 30 – 45 seconds downloading and browsing a web page, and used up about 4 minutes of my airtime. That’s not a good situation as far as I’m concerned. You can’t turn off 3G (as you can with Android phones). The only thing you can do is turn off images.

On the plus side, I guess the pages loaded fine.

The Tracfone Motorola EX431g comes with two simple games pre-installed – Copter and Chicken. Copter is a very basic flight-simulator type game that is controlled with one button. You press the “5” key to lift the helicopter and try to avoid crashing. The Chicken game at least lets you use all four navigation keys to keep the bird from getting stuck on thorns and stuff.

Yes, they’re pretty simple games, but at least they’re the full games and not just demo versions that you can only play for a few seconds. You can, of course, download additional java games and from Tracfone and other sites. You can also download and use various java apps.

Finally, the usual tools are available such as a calendar, alarm clock, calculator and currency converter.

For information on how to operate this phone, check out the Tracfone Motorola EX431g interactive tutorial here.

Other information is available on the manual (pdf) here. 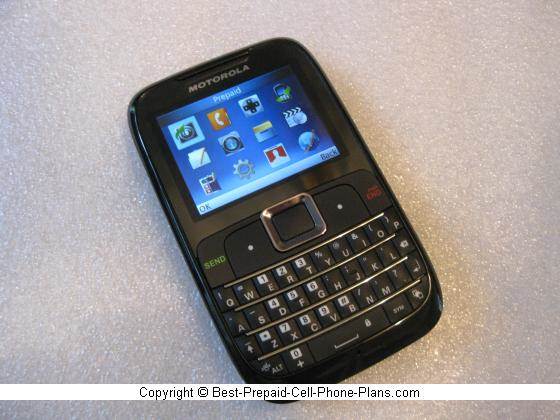 The Tracfone Motorola EX431g is a good double minutes phone with some better than expected features such as the camcorder and radio. As long you’re okay with the compact size, you should check it out.  The price on it has dropped to 29.99 direct which is about right for this phone.