But before we look at the plans lets check out the...

According to Consumer Reports, Verizon has the best coverage overall nationwide. Since all Verizon prepaid phones are now 4G LTE phones, let's see if there's any difference between what Verizon calls their 4G LTE coverage and their Prepay Voice/Data coverage.

As you can see below, the two maps from 2019 look identical. 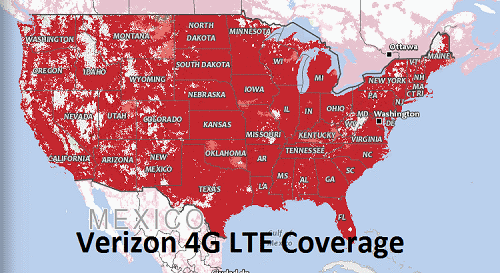 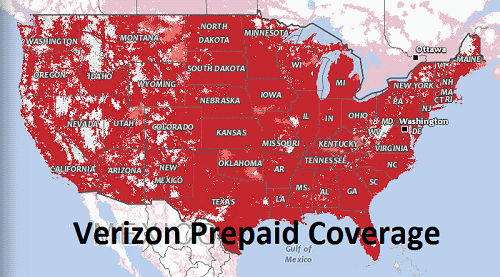 The difference between contract and prepaid might be that the prepaid is now only restricted to the 4G network, while contract plans allow you to use their other networks or roam on other networks.

When we lived in the Chapel Hill, NC area we checked out the coverage: looking east to Wilmington Beach, Kittyhawk and the Outer Banks, coverage was pretty good with thick bands along most of the highways, with coverage even in the Outer Banks. They also provide a national coverage map. You are only considered to be roaming when you are outside their digital coverage area for your plan. So you can be outside your local area, but as long as you're within their national digital network, you're not roaming.

If you live in a sparsely populated area, then you might be better off with a standard Verizon contract plan with the slightly better coverage because you do need to be able to make your calls.

All in all, the coverage today is better than ever and should continue to improve. In 2017, Verizon signed a three-year $1.05 billion agreement with Corning so they could continue to expand their wireless broadband network through 2020.

So now let's look at the Verizon Wireless Prepaid Plans.

Verizon's 15GB Prepaid Plan for $45/month (with Autopay) plan makes it competitive with some of the independent plans available. There is also a $30 per month Wi-Fi only (no data) plan. All of these also include unlimited talk and text.

Previously, they used to shut you down once you reached your limit, however, they now feature "Always On Data" which means they do throttle you down to 128 kbs once you've used up your high-speed allotment. However, with 15GB, you may not reach your limit or at least reach it later in the month.

You no longer have to add "Bridge Data" unless you feel the need for speed. Then, when I last checked, $10 would get you 1GB of data good for 90 days and $20 would get you 3GB.

They used to offer additional data as described below for signing up for autopay, but I no longer see that mentioned on their website. Still waiting to confirm this.

As mentioned, previously with autopay, you could get an additional 500MB data.

All devices offered under the smartphone plan are now 4G LTE phones. Options for 4G phones include

They longer sell 3G smartphones, but if you already have one of these and want to use it, you could.

This now means that their plans are more in line with, say, Straight Talk smartphones, which can also run on the Verizon network and has always had this "always on" feature. The amount of data in their respective plans does still differ.

For this plan you can choose from a couple of flip phones (Samsung Gusto 3, LG Revere 3, LG Terra), a slide-out QWERTY phone (LG Cosmos 3) or a touchscreen phone (LG Extravert 2)

These plans are no longer advertised, but those who have them may still be grandfathered in.

The Basic plan is really a pay as you go plan with every minute costing 25 cents and no daily fee. You should consider this plan only if you really don't make calls every day. Text messages cost 20 cents each to send and receive.

A $100 airtime card is good for one year of service and 400 minutes (minus the cost of text messages). This is not a good deal compared to Tracfone. Even if you're a very occasional user, I don't recommend this plan unless you really want Verizon's coverage but not one of their other plans.

This plan charges a daily access fee of 99 cents only on the days you use your phone. This comes to at most $31 per month if you use it every day, but less if you don't.

The 99 cent plan allows unlimited free Mobile to Mobile calling with other Verizon customers. This is perfect if you have friends and family members who have Verizon phones (they don't have to be prepaid).

Because you are charged only on the days you use the phone, it's hard to estimate what your yearly cost would be without making some assumptions about your calling habits. If you use the phone every day, you would have a minimum charge of $361.35 plus the activation fee of $25 plus 10 cents per minute of calls or text messages. If you use 600 minutes or text messages a year (less then 2 minutes a day), that comes to $60. This give an approximate minimum cost of $400 a year.

This would go down quite a bit if you use the cell phone less than seven days a week and tended to mainly call Verizon numbers.

I definitely recommend this plan if your friends and family already use Verizon and if you have infrequent (but long) phone talks with them on the phone. Compared to a contract plan or even to some of the other prepaid plans, you could save maybe $400-$500 a year.

1.99 per Day Plan (Formerly Inpulse Plus)

If you use the phone every day, the minimum yearly cost for this plan (including the activation and setup fee and 600 minutes) is a little more than $800 a year.

This plan could be great for someone who calls home on weekends.

Picture and video messages cost 25 cents each. These are apparently not included in their...

If you will send and receive a lot of texts, then you can buy a $20 a month bundle for unlimited mobile messaging to anyone in the US. If you will primarily text people with Verizon phones, you can get their $10 a month bundle. This bundle allows unlimited texting on the Verizon network and also includes 250 messages to anyone outside the network.

It will cost you 99 cents per day. The day last for 24 hours. This is not bad. Having mobile web, means you can access most common email accounts like Yahoo, etc.

Ringback tones cost 99 cents per month and 1.99 per year.

You can add airtime by buying airtime refill cards online or in stores, or you can add minutes directly via a "My Prepay" account at Verizon's website.

You can buy airtime refill cards directly from Verizon, but they only sell the $30 card. You can buy up to 5 of those at a time.

In stores, you can buy cards in denominations of $15 to $100 which last from 30 days for the $15 refill card to one year for the $100 card. Verizon has extended the length of some of the calling cards to match those of other companies.

Here are the current refill options:

And finally, airtime bought for $100 or more expires after one year. It makes sense then, to buy airtime in $100 increments especially if you don't use a cell phone all that much.

For more flexibility, you should get a

With My Prepay, you can buy and add airtime in various amounts to your phone without having to purchase airtime refill cards. You can also receive offers and promotions via email. As noted above, different phones are available depending on which prepaid plan you choose. For the basic plans, you can choose from about five or six phones ranging from a basic flip phone like the Samsung Gusto or LG Revere to QWERTY slider phones like the Pantech Caper and even a touchscreen like the LG Extravert 2.

For the smart phone plans, they have a good selection of 4G LTE smartphones ranging from under $100 to the latest top-of-the-line gadgets. Pictured to the right is the Moto G.

Do you get any free minutes?

Yes, you used get 10-15 minutes upon activation of a Pay as you go plan, but that's not relevant to the current plans offered.

Officially, there is an activation fee of up to $35, but you can avoid that by purchasing your prepaid phone online directly from Verizon. However, the online prices can be higher so you should take that into account.

You get a 14-day Satisfaction guarantee. If you paid an activation fee for your prepaid phone, you have three days to return it and still get your activation fee back. If you order online, even though you paid no activation fee, you may have to pay a restocking fee - no kidding.

You can call internationally. In most cases there is a surcharge added to your normal rate. Also you can actually make roaming calls from a few places like Puerto Rico, Mexico, Canada, the Virgin Islands and Bermuda.

Puerto Rico is treated as being in the USA so there's no additional charge from making calls to Puerto Rico.

Roaming calls made while you're in Puerto Rico cost 69 cents per minute.

Roaming calls made while you're in Mexico cost 99 cents per minute.

These rates are somewhat reasonable, but not the rates for calling anywhere else.

It costs a whopping additional $1.49 to anywhere else in the world, which means you'd only do it out of desperation. Most of the time you'd want to use those calling cards with a toll-free number.

Verizon has a good setup for sending international text messages from the USA. You can access it through their website as well and send a text message to almost any country. Clicking on their text message map brings up the various mobile networks in that particular country.

It costs an additional 10 cents to send or receive a text messages from participating carriers in Mexico and Canada.

It costs an additional 25 cents to send and receive a text message via participating carriers from elsewhere in the world.

This page allows you to select your country and click "Display" to see the list of carriers.

You can get discounts for purchasing Verizon prepaid cell phones directly from their website. For example, you can get a no-contract prepaid iPhone 4s at a good price.

Here's the customer service phone number as well as a link to their forums.

Customer Service - Pay As You Go

To get customer service you can either:

Dial *611 from your cell phone

Use their customer forums to find out if others have had similar issues. Though the forum is for all voice and broadband issues, the search button seems pretty effective for finding posts about their prepaid service.

If you want to switch, but want to make sure you have great coverage, then the new Verizon Prepaid plans can be a good choice. They offer more high-speed data and no longer cut you off completely when you use it up.

For many people, Verizon's network provides the best coverage. However they may not want to use the prepaid or no-contract plans the company provides. You can carefully choose another provider.

Tracfone handsets with model numbers ending in the letter "C" use Verizon's CDMA network. These are not always available in all areas. Their Android smartphones also use the this network.

Similarly, the Straight Talk plan offers smart phones that run on one of the four big networks. You can use that list to select your phone based on coverage.

A similar set of phones is available on NET10. In both case, you have to activate the phones on the respective unlimited monthly plans.

GreatCall sells easy to use phones with no-contract plans for seniors and baby boomers. While famous for their large-button phones, they now offer a Samsung smart phone. Their coverage is provided by Verizon.