What Happens When Your Payment is a Little Late

One new thing I learned about Jitterbug cell phone accounts is their late payment procedure. This is not printed anywhere that I could find, I had to be late on my last bill to get filled in on this.

Okay, so even though I don’t use the Jitterbug everyday, I have kept a phone and an account for testing purposes and for answering questions on this site. Sometimes, when things get too busy, it’s out of sight and out of mind.

Lost in the Holiday Rush

That’s what happened this holiday season. We had some guests and had a great time. Then, suddenly one day in the first week of January, I realized I hadn’t paid my Jitterbug bill that was due on December 30th.

Well, I sent out a check immediately for the usual amount The check was cashed, and I waited for the next bill wondering what the late payment would be.

I soon received the bill dated January 12th and opened it and got a pleasant surprise. Even though my check had been cashed on January 11th making it twelve days late, there was NO late fee!

So it looks like you may have until the next bill date to make your payment. Now, I don’t know if this is their general policy on late payments or if this was an exception. Of course, I'm not planning on finding out.

Either way, I was happy.

Just thought I’d pass this along.

How was your experience? Feel free to comment on the Jitterbug ratings page.

Are you thinking about getting one for yourself or someone else?

You can now make online payments from your GreatCall Jitterbug account. You do have to first call them up so that you can set up a separate "CPNI" password which will be sent to you via postal mail. 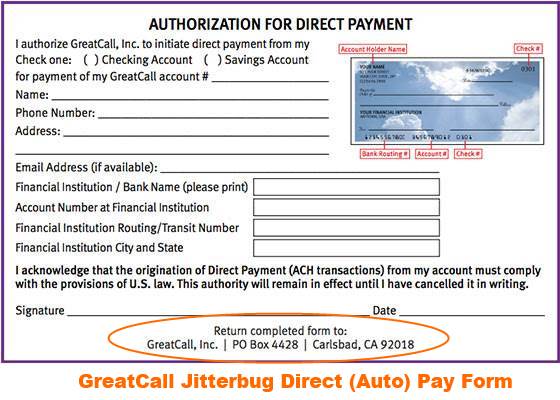 I just got an email encouraging me to sign up for direct payment from my bank account to avoid any late payments. The email included a form that has to be printed out, filled in and mailed to to physical address.

While this has its conveniences, I would also recommend checking the bill, to make sure that you're being billed the right amount. You do get a bonus of 100 minutes for your trouble.

(Actually I've been getting an email about this every two days. However, you can easily opt-out of these if you wish - I keep subscribed so that I can report any new information.)

This one is not so nice. Jitterbug forgot to mail my bill one month. This made it difficult to pay it. Next month I received two bills on the same day. One bill was the one they had forgotten to mail. The current bill contained a nasty surprise. First the bill mentioned the last month's bill and claimed payment was late. Next there was a separate letter about how service would be suspended if it was canceled.

I paid the bills as there was no late fee. However I soon received a notice that my account had been suspended and that collection agencies would be notified. Now, my check had already cleared, so the notice must have been mailed before they got my check.

When I actually checked the phone, it was still working so service had either been restored or never actually been canceled. (I don't know which because I maintain the account primarily for testing.)

So my current conclusion is that problems with Jitterbug cell phone accounts are probably due to incompetence rather than something worse.

They're not trying to rip you off. As long as you stay on top of them, I'm optimistic that you will still have a good experience.