MetroPCS is a no-contract cell phone provider originally based in Dallas, TX that merged with T-Mobile a couple of years ago. They have good nationwide coverage (4G in select major cities) and availability in large number of major metropolitan areas – hence the name. Since their merger they have expanded to outlying areas - for example the picture below is from a suburb in Northern Virginia. 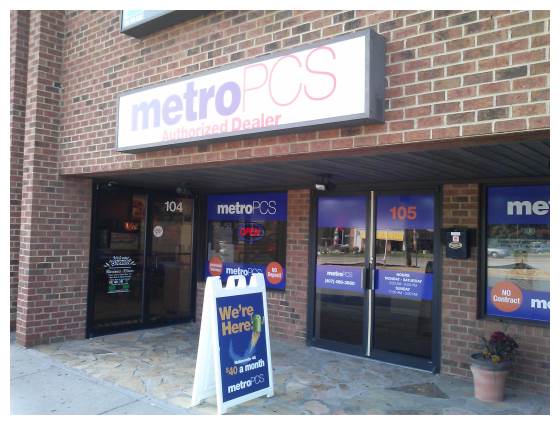 Because their service wasn’t actually available in my area until recently, I’ve been holding off on a write-up. What I found out is that they might actually be a . . .

You may have heard about what Grand Rapids, Michigan did when they were called a “dying city” in a Newsweek article. Some 5000 residents got together to shoot a “LipDub” video to a live recording of Don McLean’s American Pie. They got a bunch of sponsors to pitch in to cover the costs. MetroPCS was the only national company (and the only cell phone company) to be a Platinum sponsor.

This fits in with their slogan, "Wireless for All".

I thought that was neat, so I took another look at their service. The first thing I looked at was their coverage.

Their street-level coverage locator lets you see how good your coverage will be in the location where you’ll be spending the most time. You can see the coverage for unlimited talk and text as well as their extended home area (via agreement with other carriers).

The company originally had reciprocal agreements with companies like Cricket to share their network in areas where their own network was not available. This helped them compete better against the big phone companies. Presumably they don't need this since their merger.

So take a look and see if you're covered then you can consider the plans.

Unlimited Plans starting at $40 per month

All plans are no-contract plans with unlimited local and long distance voice, unlimited text and picture messaging, and unlimited MetroWeb html web access. These plans start at $40 per month. You can save an additional $5 per month per line if you have multiple phones registered to them.

For $5 more, the $45 plan gives you access to a few nice features such as Visual Voicemail, international messaging, unlimited short codes, and Screen-it caller id.

This is a service that saves you time by converting voicemails to text so that you can quickly read them. If you hate checking voicemail this is for you.

If you love signing up for the text message services you might like the ability to send unlimited short codes. These services are all over the place these days. In a nearby shopping mall, you can even request a song to play in the food court's music system. (Although I'm a little suspicious about whether they actually take your request.)

Screen-it offers real Caller ID that actually works – something you don’t normally find on cell phones. You can know who’s calling you, even if they’re not in your contact list. If their name is not available, your MetroPCS phone will show the location where they’re calling from. So, you’ll have some idea about who it may be.

Pocket Express gives you instant access to sports results without having to turn on the web browser first and go to the sports site. For example, if you want to know who won Game 5, you’ll know instantly.

With the $50 plan you get access to a Loopt, a GPS-based friend-finder. Once you find your friends, you can use turn-by-turn GPS navigation to go meet them. If you don’t have time, then you can communicate via unlimited instant messaging or unlimited email access.

If you’re in one of the areas (see above) with 4G LTE service, then you can get one of their 4G phones and sign up for their 4G plans. The great thing about these plans is that they also start at just $40 per month!

The $40 4G plan mirrors the regular $40 plan, but you get access the web at 4G speeds but with a 100MB monthly streaming access limit.

The $50 4G plan mirrors the regular $50 plan but with a 1 GB monthly streaming access limit.

The $60 4G plan is the same as the $55 plan but with unlimited multimedia streaming on the high-speed network.

You can additional features on an a la carte basis. Some of them cost $1 a month extra. There are also a few $5 bundles such as the music bundle which adds full-track mp3 downloads as well as access to ringtones and ring-back tones to your phone.

There is a good line of phones to go with their plans. These phones are reasonably-priced but will cost you a little more than you would pay from a contract provider. Still, since the plans are cheaper, you will make the cost back even faster than you would from a major provider. Once you confirm your coverage and the kind of plan you want you can choose from touchscreen phone, some of them running the Android OS and even some 4G phones if available in your area.

In fact, we received this offer for a Nokia Lumia 640 for switching to MetroPCS. This means they're really trying to get you. This offer is a combination of two rebates: a $39 switcher rebate and a $90 phone rebate. The main exception to this offer is that you can't switch from the company that owns them, namely T-Mobile. 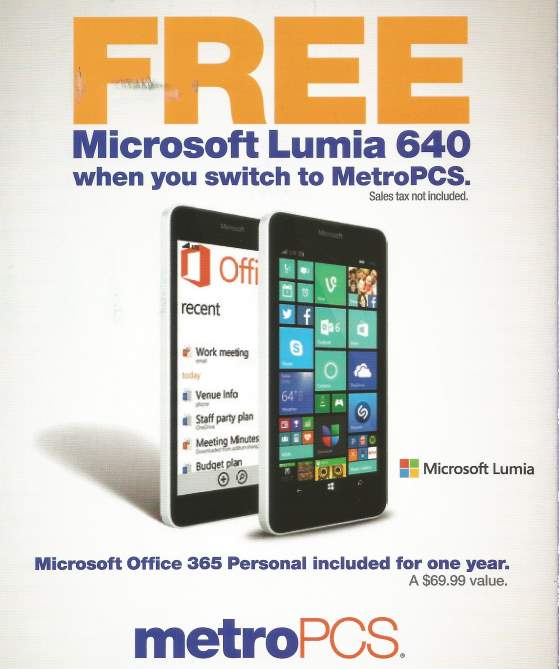 Another related offer is for a Office 365 personal one-year license for the phone.  This offer includes 60 minutes of Skype calling (to phone numbers I guess) per month.

If you’re in their coverage area, and you need some sort of unlimited calling or texting, take a look at MetroPCS.