The Tracfone Samsung T404g slider phone with horizontal QWERTY keyboard has a 2.0 megapixel camera, music player, and Bluetooth. You get 50 percent more time for talking and text with the Triple Minutes for Life feature compared to a typical Double Minutes phones. This feature triples the amount of minutes on any airtime card or PIN you buy and also triples the minutes you get on the monthly value plans.

This phone is the successor to the Samsung T401g (for NET10) which I used for a long while. I really liked that phone and hated to give it up (in order to test another phone). So I wondered, “Would the T404g would live up to that standard?”

The next generation of this phone is the S425g which is part of the "S" series that includes the S390g vertical QWERTY phone.

The real horizontal QWERTY keyboard is great for those who don’t like using touchscreen displays for texting. If you prefer pressing real buttons then the T404g may for you.

The rectangular keys are well-spaced in four rows with the letters printed in orange lettering and the numbers in white. In contrast the T401g had 3 rows of square-shaped keys with the coloring pattern reversed.

On the fourth row are some convenience keys such as a “www/.com” button which make it easier to enter website addresses.

The numeric keypad is also pretty nice. It now features distinct real separate buttons and a redesign of the navigation keys. The new navigation keys are easier to press, but it takes a while to get used to the alignment with their corresponding options on the screen above.

One cool setting is the voice confirmation setting on the numeric keypad. So, for example, when you press "2", the phone says "2!" as a confirmation that you pressed the button you meant to press.

The bright display is also slightly larger than the screen on its predecessor. In addition, the color scheme features a hot pink background. You may think you won't like that, but it actually makes the screen easier to read.

The Samsung T404g has a 2.0 megapixel camera which takes some pretty good pictures. When you hold the phone sideways and press the button on the side, it feels like you’re using a regular camera rather than a cell phone. It’s easy to hold the camera steady so you can take good, clear images. You can tweak the settings depending on the lighting.

Pressing the button on the side instantly puts the phone into camera mode without requiring you to press and hold the side button for at least a second as many phones currently do. You can use the keypad autolock to prevent the phone from going into camera mode accidentally.

You can take low-resolution (176 x 144 QCIF) videos in MP4 format. While the videos are small, the format is at least convenient for viewing and even uploading to sites like YouTube.

While you can store a few photos in the phone’s internal memory, eventually you’ll probably want to use a microSD memory card which you can insert into the Samsung phone. You can use up to a 16 GB card, so you can have lots of room for your stuff.

The slot for a card is somewhat hidden – it is just under where the SIM card is. One drawback (compared to the T401g) is that you have to remove the back on the T404g to insert and extract the memory card. On top of that, the back on this phone is quite difficult to remove. This can be a plus, because it doesn’t fall off either.

You can transfer a few songs at a time over Bluetooth, use a data cable (need an adapter) or transfer them directly to the memory card via a card reader or adapter.

Another reason to get a memory card is to store your music.

Listen to Your Music

Once you insert your memory card, you can store tons on songs for your listening pleasure. You can listen to your songs one at time by finding them in your Music Folder.

To hear sets of songs such as albums, you create playlists on the Music Player tool.

You can listen to music directly through the phone’s speaker. To hear them on earphones, you still need a Samsung to 3.5 mm earphone adapter or a set of earphones with Samsung plugs. Both items are pretty inexpensive on sites like Amazon, however it is one extra hassle. (The version of the phone I got didn’t include an accessory kit, so I don’t know if they include this item.) The adapter is a better bet since it means you can use any set of stereo earphones rather than being limited to the Samsung type.

You can surf the web and check out most of your favorite sites on the Tracfone Samsung T404g. There seems to be a full HTML browser on this phone. The text on the screen is a little small so some people may find the web pages difficult to read.

You can scroll and click using actual keypad buttons, so it’s less difficult to navigate through the web than on some of touchscreen phones offered by Tracfone.

What you can Do

Here are some things you can check out via the web browser. You can access downloads from Tracfone’s own site. Check out Facebook and various email and networking sites like Hotmail, Yahoo! Mail, Gmail, AOL, Twitter and MySpace. Catch the latest weather, sports and news info. You can even go to sites like eBay, Amazon.

You can’t view YouTube videos or any Flash-based site (though that’s true of most phones). In addition, web pages that contain a large amount of data (especially pages with a lot of JavaScript) can overwhelm the web browser on this phone.

Since it’s a little redundant to have both buttons for the same action, you can re-assign the envelope button to open the Inbox instead or even assign it to the Games menu!

One game called Luxor Quest is included on the T404g. Luxor refers to the ancient city of Thebes in Ancient Egypt. Your goal is the same as that of the Pharoahs. You have to overcome obstacles and get to the afterlife. This makes it a unique, if slightly morbid, game.

You can install additional Java games directly from Tracfone or download them from other sites.

Check availability at Tracfone and NET10 (free shipping at both sites).

All in all, the Tracfone Samsung T404g is a good, sturdy phone that is a great option for those who want a horizontal QWERTY keyboard with real buttons.

This is one of number of QWERTY phones available for the Tracfone and other prepaid plans.

The LG 900g was my faithful companion for about a year. You can still get this at a discounted price from NET10. 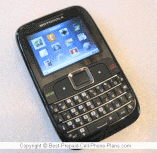 I like the shape and the radio on the Motorola EX431g, but wasn't too thrilled with the rubbery feel of the keyboard.

Of course, touchscreen phones in general and smart phones in particular are what's popular these days. Here are some prepaid or no-contract options.

The LG 840g is as good as a touchscreen phone can be without being a smart phone. It was one of the best Tracfone handsets available until the release of their Android models.

You can choose from a wide variety of smart phones from Straight Talk which run on all the different networks.