I saw a US Cellular store during a brief visit to Charlottesville, VA and realized that it was probably time to update my review! Their prepaid plans start at $30 per month for unlimited talk and text and varying amounts of data. These used to be called "Simple Connect" plans but are now just referred to as their prepaid plans. They also used to have cheaper plans for basic phones, but these are no longer offered, though you may be grandfathered in if you already have it. 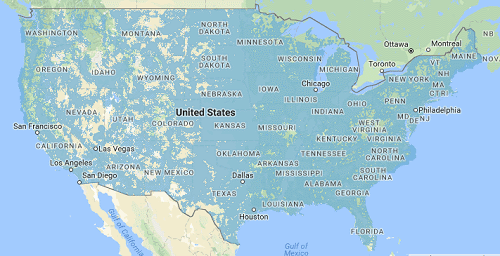 But first lets look at their coverage. This Illinois-based company has its own network with pretty good coverage in the United States. In fact, if you look below, you can see how much their coverage has improved by comparing the 2018 coverage map to one from a few years ago.

However, I think they still only actually offer service in a limited number of areas.  For example I checked coverage in Chapel Hill, NC and got the message that coverage there is provided by a partner network.

Their coverage maps look fine. However, to find out where you can actually get their service it's probably better to use their store locator see if they have any stores in your area. The locator lets you keep zooming in to find individual stores. 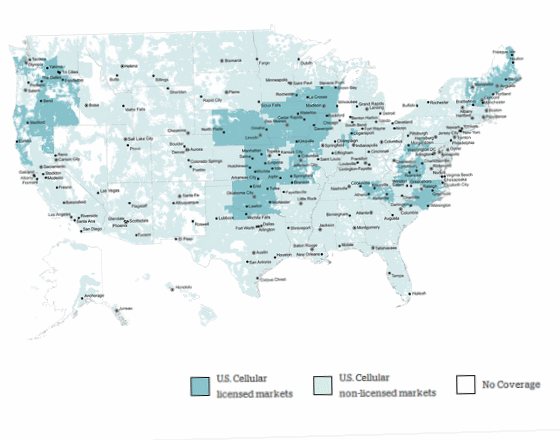 4G LTE coverage is still offered via their partner King Street Wireless, a company based in Northern Virginia. Their website names about two dozen local markets where they provide coverage for these plans.

US Cellular launched their monthly prepaid plans, then called Simple Connect, in 2014. These plans replaced their earlier no-contract plans, and they really were simple (unlike their contract plans). They have remained essentially the same though now offer more data as is the general trend.

For $30 per month you get unlimited talk, text. Data is purchased on a pay per GB basis. You might consider this is you live in an area (say a college campus) where you usually have access to WiFi.

There used to be a handy widget on their site to estimate how much data you might need, and I used it to plugged in a few typical number of what this might be. As expected, streaming (HD) video has the greatest impact on usage. This was meant to help you choose your plan. Of course, usage has gone up since then, and they have removed this tool for estimating cellular data. (They still have a tool for their internet access service.)

If you have WiFi access for significant parts of the day, then you might not need the most expensive plan.

However, the prepaid plans are listed as have no "overage" charges, so it looks like that is no longer an issue, but I will investigate further.

US Cellular has a full line-up of phones, many of which are available on their prepaid plans. You can also bring your own phone.

Separate pricing is displayed for prepaid and contract plans. For example, the iPhone 8 is available prepaid for $699.99 or for free if you stay for 30 months on a contract plan.

They usually have special offers on a couple of prepaid phones. For example, they are currently offering $25 off any Prepaid smartphone $100 or more! Use Code OCT18.

US Cellular no longer offers basic phone (such as flip phones) online.

Cellular Country used to carry a good selection of refurbished phones ranging from about $34.99 for basic phones to around $200 for some pretty good Android phones. According to Cellular Country they verified all these phones to work with US Cellular. However, when I last checked their website (02/23/2015), they did not have any devices available.

The updated US Cellular prepaid plans are pretty competitive for smartphones, a good way of trying out their service and getting a good deal on a smartphone.