With i-Wireless prepaid cell phones you can earn airtime by shopping at Kroger supermarkets throughout the US. Individual plans start at $25 per month for 200 minutes and unlimited texts.

You can buy refills in denominations of $10, $20, and $50. After the first three months, however, the rate plan changes to a basic plan with separate daytime and night and weekend rates unless you pay a small monthly fee. There carry  attractive phones including Android phones under $50 and texting phones under $20, but we're getting ahead of ourselves.

Note: Don't confuse i-Wireless with iwireless. The latter was a T-Mobile affiliate (with its own sports arena) based in the Midwest and later acquired by T-mobile. It was not primarily a prepaid cell phone provider and had nothing to do with Kroger's i-Wireless.

Okay, so let's find out if you can actually use it.

Coverage is provided by Sprint - that's pretty good. You used to be able to check out your local coverage map on their website via your zip code and got a map like that shown below, but now they just refer you to Sprint.

Since the lowest plan is $10 per month, you would have to buy a $1000 dollars of groceries a month to pay for that plan. You might be better off trying to save that $10 via comparison shopping instead.

You do still get to reduce your bill by what numbers of dollars you have earned. You also earn double rewards for any Gift cards that you buy at Kroger.

Points for Refilling Minutes at the Gas Pump 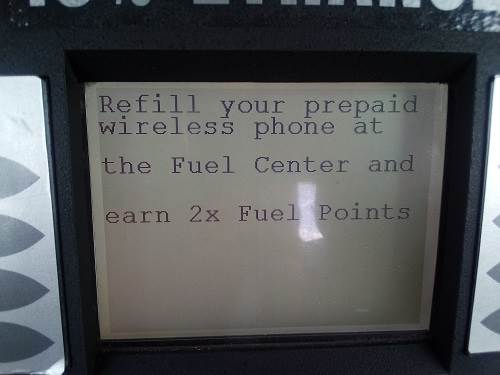 If you fill your car's tank at a Kroger gas station, you can get double the Fuel points if you also refill your prepaid wireless phone at the same time.

There are quite a few 4G phones available. The LG Optimus F3 is the most affordable being listed at 69.99 while on the higher end, you can get the iPhone 6 or Galaxy S6.

The latest list of Android phones, both new and reconditioned, start at $19.99 and up. i-Wireless has a changing line-up of new and refurbished phones at attractive prices. Since one of their goals is to keep you shopping at Kroger (or Fred Meyer, etc.), they give you a good deal on these basic smart phones.

Here are a few examples:

Or Bring Your Own

If you've already got a actual Sprint phone (not Virgin or Boost Mobile), you can activate it on one of these plans. However, they understandably don't offer support for any phone-related issues on these devices.

There used to be $20 Gift card rebate which dropped the effective price of the phone even further. This was then replaced by the $20 of airtime for buying $100 of stuff at Kroger, etc. Now they have a Rewards program, but you have to buy a lot more stuff in order to really benefit.

Note that Kajeet also lets you activate a Sprint device on their kid-friendly plans.

Update: The basic Pay as you Go plans and Family Share plans are no longer offered.

Their individual plans start at $10 per month for 100 minutes or texts and go up to $75 per month for unlimited voice, text and data including 3 GB of high-speed data.

Of these, the $35 per month plan with unlimited talk, text and data including 500 MB of high-speed data is a good option if much of your data use is on a WiFi network rather than the cellular network.

Basic Pay As You Go

There are two basic plans. If you rarely use the phone, you can avoid a monthly charge and pay 20 cents a minute instead. That's a little high, but if your usage is low enough, it could be worth it. If you pay $5 a month your minutes will cost 10 cents each. You can refill your airtime online or buy refill cards in participating stores.

Their Family Share plans also start at $80 per month for two users. On this plan you can share 2000 minutes, unlimited texts and 1 GB of data. Each additional user adds $20 per month to the plan, but you still have to share the same number of minutes and data.

The unlimited Family Share plan costs $120 per month for two users. Each additional user costs and additional $40 per month. You get unlimited minutes and texts, but you have to share 5GB of data. So it's not a totally unlimited plan.

In order to make international calls, you need to buy separate international airtime cards that are available at the stores. Rates vary depending on the country you call.

You can add airtime via the web, paper refill cards, your i-Wireless phone, or even another phone.

Refill cards come in denominations of $10, $20 and $50. The $10 card expires in just 30 days, but the other cards are good for 90 days. So you minimum expense would be at least $20 every 90 days, to keep your service active, which is comparable with Tracfone (which has also started a coupon savings program).

You can manually activate the Refill cards online by entering their airtime pin code.

Via Web or Phone

You can add minutes via online or by phone.

It's a little difficult to find detailed their customer care section or specific info about their answering system, so for your convenience, the instructions for how to navigate the voicemail menu is located here.