I was checking out the Moto G on the AT&T GoPhone page and saw that it was being advertised as a 4G LTE phone. That didn't sound right, so I clicked on the chat to confirm. You can see below what I found out, but first the intro.

The Moto G is part of a lineup of three phones introduced shortly after Google acquired Motorola. The other two are the Moto X and the Moto E. The G falls in the middle of the line-up. It is not as powerful as the X but not as stripped down as the E. As of January 2015, the X and G have been updated once. The E was the last one released, and it is still in its first version. All these phones run fairly recent versions of the Android operating system, so you should be able to do pretty much anything you want (within reason) with the phone.

As I said, this phone stands in the middle of the lineup and has most of the features of the X, except for one significant limitation.

It is a 3G phone, which seems to be where from where it gets its name. This means that when this phone has to go on the cellular network, it uses Sprint’s 3G network.  The minimum speed to qualify as 3G is 200 kb/sec, however all the big carriers offer speeds higher than that. Generally speaking, the slowest speeds appear to be from Sprint, and the highest speeds are from T-Mobile. Currently the Moto G is offered as a no-contract phone on the Republic Wireless (which uses Sprint’s network), Verizon Prepaid, and AT&T GoPhone plans.

The Moto G for AT&T has been specially manufactured to support the 4G bands. 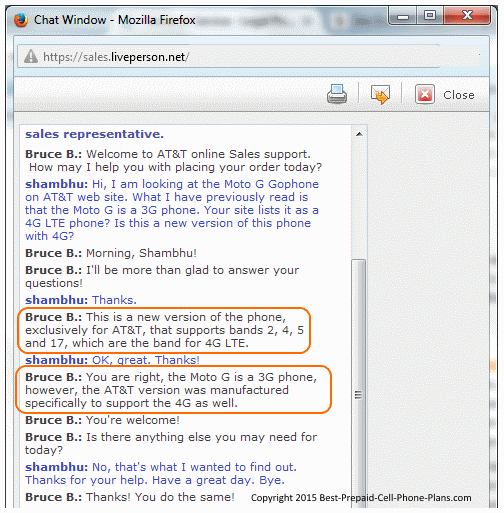 Note: This is still part of the first generation Moto G models. The second generation model is still a 3G phone but has some other upgraded features such as the screen.

Also on US Cellular

I just found out that U.S. Cellular now also offers the LTE version of this phone. In fact, it is offering it on sale apparently as part of the relaunch of their prepaid plans which start at $45 per month for smartphones.

In actual use, as long as you have good coverage, 3G is not that bad unless you stream a lot of videos. If you’re interested in the Republic Wireless version of the phone (they have great plans), then presumably you will have access to Wi-Fi much of the time. If this is an issue for you, you can get the AT&T version.

The 5 MP camera should be good enough for most uses. The Moto X and other newer phones have higher resolutions, but because the lenses tend to be about the same, you don’t get the full benefit of the increased resolution as you would with a dedicated camera like a DSLR. Still, the phone has one advantage over the DSLR: you always have it with you.

The 1.3 MP front-facing camera means you can take decent enough selfies. You will also be able to use Skype or other applications for face-to-face video with your friend, relatives and so on.

The 4.5 inch LCD screen made out of the so-called Gorilla Glass scratch-resistant material. The size is big enough yet still comfortable to hold in one hand.  Screens, of course, are gradually getting bigger just like the TV’s. For example, the newer Moto X has a 5.2 inch screen, and as everyone knows, Apple finally joined the big-screen bandwagon with the iPhone 6 and 6 Plus. Still, earlier, they touted the ergonomics of a slightly smaller screen, and they were partially right, except people still wanted bigger screens because bigger is better right? Or maybe they just wanted to ditch their iPads. Who knows?

Well, if you choose the G, you are saying that a 4.5 inch screen is big enough, for now. In fact, for the price, the screen was one its main selling features.

So, what about how the stuff on the screen works.

Talk time is listed as being up to 24 hours on the 2070 mAh battery. That’s pretty good. The standby time does not appear to be listed. Perhaps that’s because standby time varies significantly depending on which services and apps are running that require periodic access to the Wi-Fi or cellular network.

Smartphones and the apps that run on them are getting smarter about their energy usage. If your phone hasn’t moved in a while, these apps guess that you don’t need the latest update all the time, so they limit how often they check for new mail or messages.

OK, so you might be interested, but still want to check some things to go with the phone.

Due to an integrated marketing effort for this line of Motorola phones, the Moto G has available a set of dedicated accessories. These include a set of shells in assorted colors as well as a rugged case for those who don’t want to worry about their phone getting banged up a bit.

The rugged case is from Otterbox and is sometimes called a Defender case and sometimes a Commuter case. The first name is more like marketing term and second is closer to reality.

There is also a set of Motorola earbuds with mic.

Get the Moto G

You have a couple of different options for getting the Moto G. It is available from Republic Wireless, AT&T (GoPhone), Verizon (Prepaid), and Consumer Cellular.

From Republic Wireless, the Moto G costs $149 for the 8 GB version and $179 for the 16 GB version. Doubling the internal storage is usually worth it, if it’s in the budget.

The main attraction of this version is that the unlimited plan only costs $25 per month and includes data.

The 4G LTE GoPhone version costs $179.99 and is currently only available directly from AT&T.

The Verizon Prepaid version of this phone cost $99 online (normal retail price is listed at $199). Their main plans cost $45 per month and include 1GB data (plus 500MB if you autopay).

Consumer Cellular carries both the original Moto G ($100) and the second generation version which they call the Moto G EXT ($150). The latter has a bigger screen, but, as mentioned above, they are both still 3G phones.

Unlocked handsets can be purchased from many of the major sites that sell electronics such as Amazon, Target, Best Buy, and even Motorola (though it was out of stock there when I checked).