I got the touchscreen Tracfone LG 800g for my wife when it first came out. She let me borrow it for a couple of days to write this review. 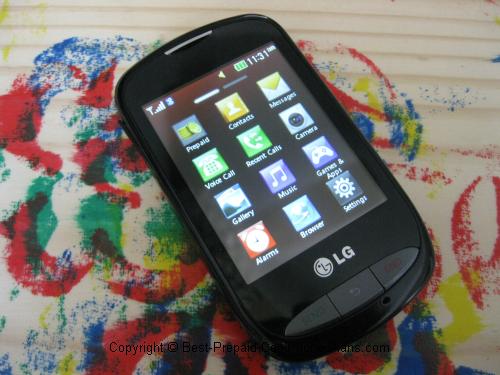 After we swapped our cellphones, I got an incoming call, and I realized I didn’t know how to answer the phone!

I tried pressing on the (auto) locked screen, but nothing happened. The display said “incoming call” but gave no indication on how to pick it up. On the other Tracfones, you can press “OK” to accept the call, which is what I do, but this one didn’t say that. This made sense since there was no “OK” button.

Finally, I just pressed the green Send button and managed to pick up the call. I had to explain why someone who publishes this web site didn’t know how to answer a cell phone.

I had a similar problem with the Motorola EX124g.

It turns out you can set it to answer on either just the "send key" or "any key". You have to press a key, however. You can't just use the touchscreen.

Anyway, as you will see, once you get used to the phone, you will love its features. Let’s start with the main one.

The LG 800g has a 3 inch touch screen display with the screen dimensions of 2 3/8 inches by 1 3/4 inches. The display itself is nice and bright, and the touch response is pretty good. When you press or drag something on the screen, you get a confirmation tone as well as vibration. You can adjust the both the sound level and vibration level of the confirmation response which I like. Note, I suspect that if you have the vibration response to be very strong it might eat up the battery a bit more because it has to make the whole phone vibrate.

The screen  locks up when making a call or checking voice mail.  That's to disable the touch screen when you hold it against your face. If you need to select the key pad to punch a number in just press one of the external buttons. 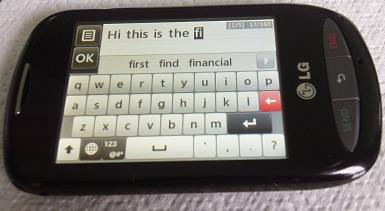 You can create and send text messages quickly and easily using the virtual QWERTY keyboard. As you touch type the letters, the interface suggests word completions. I much prefer this to the T9-style predictive text input (probably because I have never really learned how to use it).

It did take some time to get used to the virtual keyboard. Since you don't have physical keys, I couldn't quite tell where my fingers were on the screen. I had to watch the screen closely until I started to get the hang of it.

One consequence of having a touchscreen display is that the user interface has changed a bit. You can no add shortcuts to the display so that you don’t have to go into the menu swipe the screen to switch between those shortcuts and your speed dial contacts.

Other than a volume control, there are no other dedicated keys on the side of the phone. So, you really do rely on the screen and the three buttons below the screen.

Because there is no dedicated camera button, one of the first shortcuts you may want to have on the home screen is for the camera. 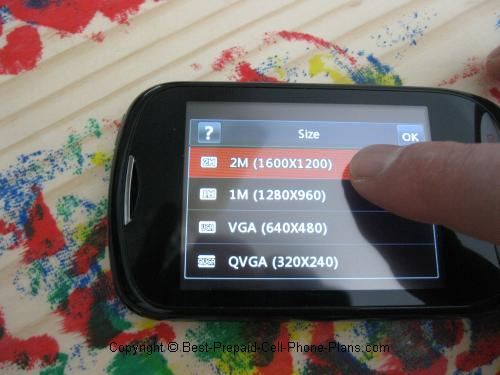 With the 2.0 megapixel camera, you can really take some nice photos with your Tracfone even if you don’t have your regular digital camera with you, such as when you’re helping out at field day or on a field trip at your school. The camera takes 1600 x 1200 pixel photos at full resolution. You can also record QCIF resolution (176 x 144) videos with sound.

I am happy with the test photos I have taken with the phone. As always with cell phone cameras and their usually small lenses, it helps if it is nice and bright to capture all the details, especially indoors. This is a photo I took one afternoon inside a coffee shop.

Here is a reduced version of the full photo. 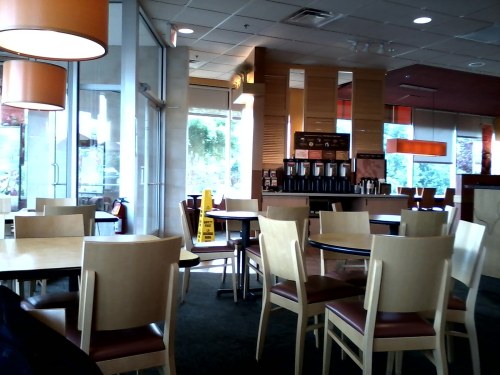 Here is a full-resolution crop of a portion of the photo. 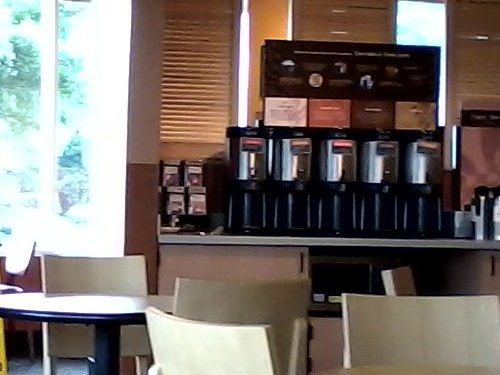 Once you are done taking your photos, you can easily transfer them to a Bluetooth-enabled computer or via picture message to an email address. A photo of a detailed scene at full resolution can be about 500KB in size. A few such photos will use up the internal memory pretty quickly. You can insert an inexpensive microSD memory card into the back of your phone to give you all the memory you probably need.

A memory card is also needed to make use of the music player. That brings me to the next little widget-shortcut for your home screen.

Next - Part 2 Music, Games and Apps