The Motorola EX124G Touch Screen phone was Tracfone's best handset when it was released and it's still pretty good. It comes with a large 3.2 inch display, a 3.0 megapixel camera, a media player that plays music and videos, and mobile web access plus the ability to check multiple email accounts. It is slightly larger and more powerful than the LG 800g, but you do have to use the included stylus for some tasks.

It’s still a prepaid phone so your monthly costs can be less than $10 a month on the Tracfone's plan or as low as $15 a month on NET10's plan, if you don’t use it much. Of course, if you’re considering it, you probably will want to use it quite a bit. In that case you can use it with one of Net10's monthly plans.

So it’s quite exciting to review this phone, so let’s get started!

Even though the Motorola EX124g has a large 3.2 inch screen, the phone itself is actually smaller in length and width than the LG 900g. The display itself is nice and bright and comes with a nice default wallpaper.

There are three default “widgets” on the home screen. The airtime widget tells you how many minutes you have. The other two widgets are for the music player and the FM radio widget (more on these later). After a few seconds, a screensaver image (a wine glass on my unit) appears, and the screen turns off. You press the power button on the side to turn the screen back on, and then you have to unlock the display.

I admit that when I first saw the locked display on the Motorola EX124G, I was stumped and didn’t know how to unlock it. After the embarrassing incident with not knowing how to answer my wife’s LG 800g phone, I was a little put out to be stumped by a simple operation on yet another phone.

At first I pressed the lock symbol, then the open circle symbol – nothing. I even resorted to turning the phone completely off and then back once in order to use it, before it finally hit me why the green arrows were there! To unlock the phone, you have to Slide the lock over to the right (you can tell I'm not an iPhone user)! The quick auto-lock feature is a little annoying, but it reduce power usage, and it allows you to hold the the phone next to your face without accidentally activating some widget. You can turn the Auto Keypad lock off in the security settings.

Get a Screen Protector 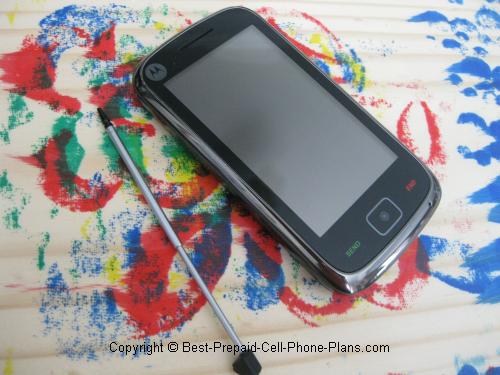 I’m usually pretty casual about getting screen protectors for my personal phone, but with a touchscreen phone it’s recommended since you’re going to be putting your fingers on it a lot.

The gravity sensor (accelerometer) on this phone helps automatically orient the display when you are composing text messages or viewing photos. This is pretty convenient.

However, some of the functions are not tied to the sensor. For example, the display does not adjust when you are entering contact information. The buttons on the touchscreen are pretty closely packed together, and it would be nice if the screen tilted horizontally for any text input function. In this case, you might need to use the stylus.

OK, let’s get back to seeing what the phone can do. 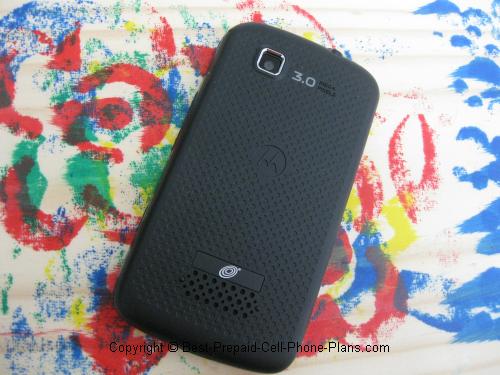 The three megapixel camera takes great photos with good color and contrast. You can compensate for the light level in real EV units, which is nice. You can set the resolution of the photos at 3 MP, 2 MP, 1 MP or VGA quality. The VGA quality resolution might be something you’d do if you were just taking photos to use as part of their picture in your address book.

At 3 megapixels, you’re getting close to being able to create a decent (small) print from your photos. It’s still a small lens, so you do need pretty good lighting to get a really clear photo. 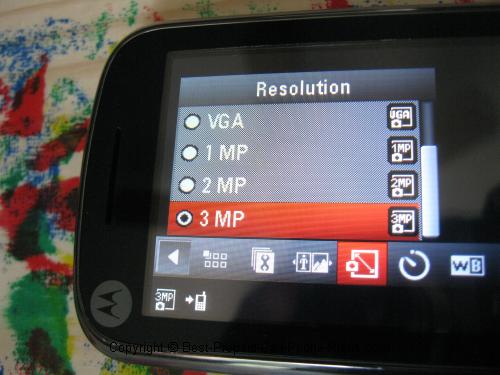 The camera also takes video. The resolution is still only QCIF quality (176 x 144 pixels), but the good news is that the videos are in MP4 format. If you transfer them to your computer, you can play them using Quicktime or upload them to YouTube.

When you play them on the phone itself, there’s a slight glitch. A pop-up window comes up that says, “incompatible media format”, but once you close the pop-up and press the play arrow again, it plays without any problems.

Next - Media and Mobile Web