The Tracfone Samsung S125g is a basic, candy-bar style cell phone that costs less than a baker’s dozen from your local donut shop. Why would you want such a phone? Well, perhaps you already have all the data access you need from your desktop or laptop computer. Or maybe, you now carry around an iPad or a Kindle Fire and don’t need to rely on your phone for email or internet access while on the go.

If so, then why waste money on features you no longer need? Get something that saves you money so that you can spend it on your other gadgets!

This appears to be the last talk and text only Tracfone, because the S150g has a web browser.

This phone is pretty well-made and quite sleek notwithstanding the $9.99 price tag. It replaced the T105g in the lineup and began the "S" series of Samsung phones.

The Tracfone Samsung S125g is a thin and lightweight phone in a sleek body with no side buttons which makes it easy to slide into your pocket. You don’t miss the side buttons due to the open-face body which means you always have access to the rest of the keys. 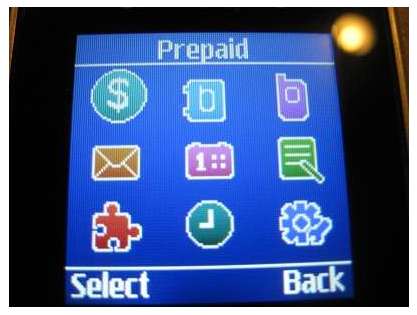 The screen is definitely small, but still bright and usable. It’s a whole lot better than the screens on their previous generation of flip phones such as the T245g.

Let me give you the bad first: there are only two wallpapers. If that’s an issue for you, then you’re out of luck. You can choose from a few different color themes for the menu. Overall, however, the visual appearance of the menu on the screen is pretty good with the sufficient amount of brightness and the right amount of contrast. The icons are simplified yet still nice and neat.

OK Keypad Except for Nav Keys

The keypad is the weakest link in the physical makeup of the S125g – being just serviceable. The number keys could be a little more distinct, but are otherwise okay. It is the nav keys that are a little difficult. The center nav key is okay, but the square metal ring (that comprises the up, down, left and right nav keys) is a little too thin. I found that I got used to it after a while. However, if you have any issues with fine motor skills, I suggest something like the Doro phone or even a touchscreen phone.

Your communication with the Tracfone Samsung S125g is limited to making calls and texts. There is no facility for accessing the internet or sending or receiving multimedia messages. Practically that means you cannot install additional ringtone or wallpapers because there’s no way to get them onto the phone.

Calling is straightforward. You dial or select a contact from the phone's address book. In addition, you can assign 8 contacts as speed dial numbers.

Q: Can you add ringtones?
A: No you can't. There is no web browser and no multimedia message capability on this phone so there isn't a way to transfer a ringtone to the phone. Trying to hook it up with a data cable probably won't do the trick either.

By default, the phone is in T9-predictive text mode that tries to guess the word you’re typing. You can switch that off by starting a text message, selecting the message field and then pressing and holding the star (*) button. You press the star button once to toggle through the “Abc”, “abc” and “123” modes.

You can store two phone numbers for each contact in basic mode. Go to Options -> Add Details to add more numbers and even assign a particular ringtone for a contact so you can recognize who’s calling right away.

As mentioned earlier, you can add up to 8 numbers from your phonebook to your Favorites which become your speed dial numbers.

The calendar on this basic Samsung device is really just a calendar and not a planner. That means you can’t add anything to the calendar such as events or reminders.

You can set up to five alarms that can be set to either go off once or on a recurring basis on specific days of the week.

Finally you can write memos though, as you might have guessed, you cannot attach these memos to the calendar. Still if you’re the kind who takes “mental notes”, you may want to consider recording them in a memo as well. 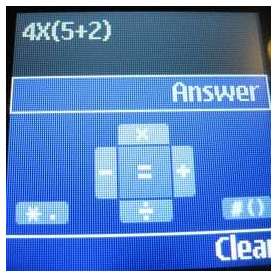 Additional tools include a world clock, calculator, currency converter, countdown timer and stopwatch. Most of these are standard on most phones. The countdown timer is somewhat unique to Samsung phones as the LG phones never seem to have them.

The calculator does basic arithmetic with one extra convenience – you can add parentheses. This means you can do calculate stuff like 4 x (5 + 2) = 28 which is difficult to do without the brackets.

Check out the Tutorial for more info on how to use this phone. You can also take a look at the manual (pdf) here.

If you’re interested in a basic phone for yourself or someone you know, then this is a pretty good option. It's good enough for staying in touch, but no extra features to distract you.

It comes with the double minutes for life feature which doubles the number of minutes on the airtime cards you buy, though this is true of most of their phones except for those that actually offer triple minutes.

You can get the Tracfone Samsung S125 direct or from your local retail store. (Note, certain retail stores like Walmart also offer an accessory kit as part of the package.)

Next - Part 2 Video and User Reviews