June 2017 Update: iPhone 7 and 7 Plus along with the Galaxy S8 with convenient payment options

The Samsung Galaxy S8 is available for $550 for a limited time. You can also get it on the installment plan for $50 down.

Up to date iPhones also available 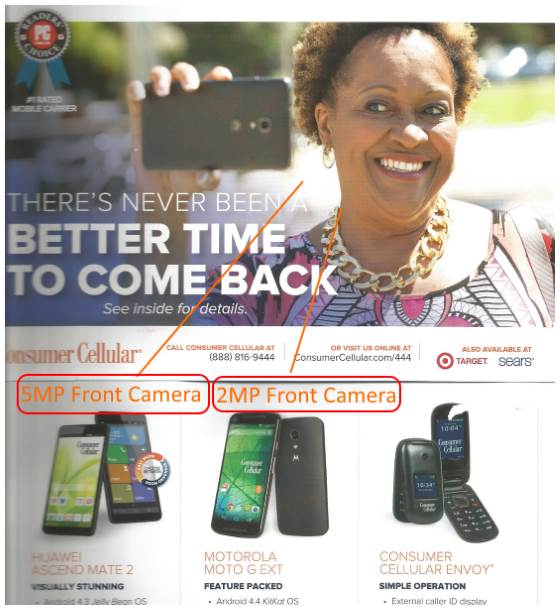 You can choose from two flip phone, one standard and one with large button designed for seniors.

This is a basic phone, but it still includes a 2.0 megapixel camera and mp3 music player. You can access the mobile web at 3G speeds, though the screen is still a little small. It is available in red and black.

Easy to Use Phones

The Doro Phoneasy 626 is the latest successor to the Doro 410. This is an easy-to-use phone with large buttons. it is also available in two colors. If you're interested in the red version, you may want to consider the Jitterbug phone as well.

The Doro 826 is an easy to use Android smartphone designed for seniors. This means that it comes with a separate easy to use interface similar to that of the Jitterbug smartphone.

The 826 has a 5 inch screen with 8MP/2MP rear and front cameras. It is a 4G LTE phone for fast data access though you need to have the plan to match. If you're mostly on Wi-Fi, this feature is not as important.

Like the other Doro phone, this has an emergency call button that you can access without going through the phone menu.

Judging from the most recent reviews on the site, most people are now giving this phone 3 out of 5 stars. Not bad.

These phones have the latest "A10" processor which makes them the fastest available. The rest of the features also live up to the billing.

The 6S has a slightly smaller 4.7 inch screen but otherwise the same features as the Plus model. Its starting price is a little lower along with a lower down payment making it more affordable initially.

The recent iPhone SE has a smaller 4 inch screen, but it actually has the same A9 processor as the flagship iPhone 6S. It is available with either 32GB of storage and costs $200 with the option of paying a $50 down payment and spreading the rest with 6 monthly payments of $25 in addition to your plan costs.

Consumer Cellular offers a selection of Motorola and Samsung Android phones along with a couple of models from other manufacturers.

The Galaxy S8 is the latest version of Samsung's flagship product line. It has all the latest bells and whistles, and you've probably seen ads for it all over the place.  It is being offered at the introductory price of $550 and can be had for a down payment of just $50 in contrast to the iPhone 7 Plus which requires a $170 down payment.

This being the previous top-end model, it's features are still very good starting with a high definition (2560 x 1440) screen. Available on the instalment plan for $50 down.

The Galaxy J3 is stripped down version that still has good features such as 4G LTE and a 5-inch screen.

This is currently the best of the "G" line of Motorola phones. They are supposed to be affordable, yet full-featured. This one runs Android 7.0, has a 2 GHz octa-core (the more cores the better) processor, and a 5.2 inch HD screen. The 12MP camera (with flash) should give you some pretty good pictures, and you have 32GB of storage.

The main advantages of the G4 proper over its "Play" version below is a better processor (octacore vs quadcore), a higher resolution 13MP camera and a higher resolution screen. It also costs $45 more and probably worth it if you don't want to spring for the G5 plus above.

A latest version of the Moto G is an 4G LTE phone with a 5 inch screen and 13 MP/5MP rear and front cameras. It has a relatively fast 1.4 GHz quadcore processor, 8GB internal storage and 1GB RAM. The higher price is because the plain "G" models were supposed to be better than the "Play" models.

Initially introduced as a low-cost but high quality phone, this version of the Moto e features 5MP/0.3 MP rear and front cameras to go with its 4.5 inch screen. It is a 4G LTE phone.  At just $40, it is the least expensive phone in their line-up except for the 101 flip phone.

The ZTE Avid 916 is a 4G LTE device with a 8MP camera (2MP front-facing) and a 5.5 inch screen. It has only 8GB of internal storage, but you can add external memory. It comes with a 16GB card, but you can substitute up to a 64GB card instead.

You may not be able to load a ton of apps, but it should still suffice for most internet tasks such as web and social media access.

The Pop 3 is a 4G LTE device that features a 5.5 inch screen with 5MP/2MP rear and front cameras. It has 8GB storage and 1GB RAM.

The Huawei Vision 3 LTE is an affordable smartphone available with this plan. Most of its features are still pretty good. It has a 5 inch screen and 5MP/2MP rear and front cameras.

The ZTE Mobile Hotspot lets you use a Connect data plan to connect all your devices - laptops, iPads and other tablets etc. So if you're in an area without WiFi you can still be connected. While there are many other options in this area, if you're already a Consumer Cellular customer or plan to be one, then this is quite convenient.

Android phone with 3.7-inch touchscreen. This is designed to be a rugged phone suitable for outdoor active use. So it fits in perfectly with their ideal customer - a active baby boomer or otherwise mature person. If that's you, that's great. Otherwise, it's still a decent handset with a 1.4 GHz processor and 5 MP camera with LED flash (a nice feature).

The Motorola EX430 has a QWERTY keyboard. The phone is not only good for texting but also has a real email client. You can take some good photos with the 2 megapixel camera, listen to music on the mp3 music player, and catch your favorite FM radio shows. A nearly-identical EX431g is available from Tracfone.

The Doro Phoneasy 410 easy to use phone had large buttons, and emergency button, simple menu, large screen with easy to read fonts and an FM radio.

You can use your phone for up to 30 minutes or 30 days (45 days and minutes for AARP members) and still send it all back and get a refund for everything.

Or Just Get a SIM card Instead

You can now get a SIM card that you can use with an unlocked GSM phone. This means you're no longer limited to choosing from the phones they currently offer. The SIM card is free if you purchase online, and there's no activation fee. You can also get it for $10 at Radio Shack and get that $10 credited back after you activate the card on your phone.

The SIM card kit comes with complete instructions. You can also watch this video here.

There used to be a $35 activation fee which made the prices of the phones seem cheaper. These fees have been removed. This makes the phone prices seem higher, but now the entire cost of your phone purchase is refundable if you cancel. Earlier, the activation fee was non-refundable.

In addition to the basic rate plans, there are add-on packages for text messages and web surfing.

Text messages normally cost 10 cents each to send or receive, though you can also decline to activate text messages if you’re sure you don’t want them.

Do you think you will send more than a text message a day? Perhaps you receive them from (just as an example) a teenage relative? Then you may want to get a Connect! package.

Packages from Lite to Max

The Connect! Lite package offers 300 text message and 30 MB of data for $2.50 a month. This amounts to less than a cent per text message and lets you check the web briefly a few times a week or view about 5 minutes of video.

Starting at $20, the Connect! packages all give you unlimited texts and varying amounts of data from 1.5GB to 4GB for $40 per month. These larger packages are great if you use your smartphone on the go a lot rather than in areas where you have access to WiFi.

If you’re someone who checks the web a lot from their phone, try the $20 a month package to see if it works for you. If you tend to wait until you’re in front of your computer, sign up for the least expensive package and see how it goes.

You can check out any website you want, but how well you can view it will depend on the phone. If you get a smart phone instead, your web experience will be great, but you will use more data.

After your surfing session, you can check how much data you've used on most phones. On the basic phones, you can go to the Recent calls section and scroll down until you get to the GPRS counter to check how many bytes you've used. On the Android phones, you can download their Usage App mentioned above.

These data plans aren't really designed for videos and other streaming media. For that, you can use the WiFi capability on your smart phone to connect it to the wireless network in your house or the hotspot at your local coffee shop.

Once you go over your allotment, it costs 1 cent per kilobyte, which can add up pretty fast.

If you find that you do go over, call their support.

Previous - Coverage and Rates from $10  Next - Features and Conclusion