The Alcatel A382 video shows some of the features of this surprisingly well-made (considering the price) phone. Features shown include the large buttons, screen, user interface, rear button and the built-in flashlight.

Your Reviews and Questions

I am so impressed with the Alcatel and the simplicity of its use. I originally purchased the phone as a Backup for my AT&T Smartphone. Now I am finding …

Side Button Accidentally Locks Phone Not rated yet
My Dad has this phone - he finds that he is continually pressing the lock/unlock side button while holding the phone. The button is placed exactly where …

Tracfone seemed to finally get it right with this easy to use phone and make it a real competitor to what else is available.

They also introduced a flip phone with a senior mode though it was not explicitly designated as an easy to use phone.

However, if you're willing to pay a little more up front and each month, there are still some advantages to the other options.

GreatCall introduced a new version of their flip phone called the Jitterbug Plus though some prefer the earlier model in Red.

In addition to updating the flip phone, they also brought out and updated a smart phone, the Jitterbug Touch.

All these handsets are compatible with the additional services and apps from GreatCall such as their Urgent Response service which includes Live Nursing advice. 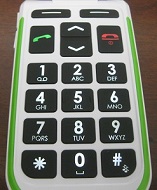 In the meantime, Consumer Cellular also offered an updated version of the Doro phone with large buttons. However they realize seniors and baby boomers have a wider range of needs. So they also offer regular inexpensive flip phones as well as a couple of nice smart phones.

They also advertise the "convenience" of standard billing rather than having to use airtime refills.