You can now see your Tracfone coverage down to the street level (for their feature phones). This info was difficult to get before because which major network you were on depended on which handset you used. Therefore, the website simply showed a generic national coverage map. For more detail, you had to figure out which network your handset used and then go to that network's site such as Verizon, AT&T or T-Mobile.

Now they've upgraded the site so that you can choose the handset you have or are interested in getting and then see what kind of coverage you will have with that handset!

Unfortunately, they don't make this info available (when I last checked) for their new smartphones. For these you just have to find out what network they're on and then check how good the coverage for that network is in your area. 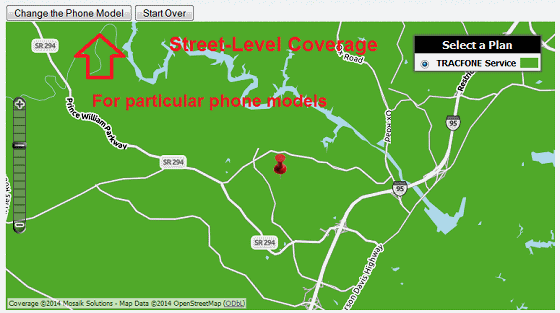 This is much improved from the earlier situation where you had to rely on anecdotal reports such as the ones below.

I wondered idly about extent of my Tracfone coverage as we sat behind an SUV with the license plate "MTNLUVR". My family and visiting relatives were on vacation and driving through the beautiful Blue Ridge Parkway outside of Asheville, North Carolina. It wasn't autumn yet, so there were very few cars on the road.

I had placed my Tracfone on the nook of the door handle of my Honda Odyssey, and as we rolled upward and onward, I saw that I still had a strong signal. I thought, well, this is a popular tourist location so I suppose there would be coverage. After all, the grass on the side of the road get mowed, something you don't notice until it's pointed out to you from someone visiting the USA. 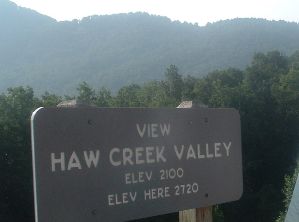 Coverage on the Blue Ridge Parkway

Here the cell phone's signal was starting to fade, but it was still usable, indicating pretty good tracfone coverage! 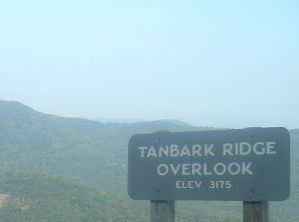 The final stop was at around 4000 feet elevation, and here, finally, the tracfone coverage ended.

We drove for a little bit longer, then as the light was fading, turned back around and drove to downtown Asheville. This was the weekend that the college students were back so it was a happening town.

A band was playing, people were dancing and a good time was had by all.

What follows are some personal experiences in somewhat "remote" areas. 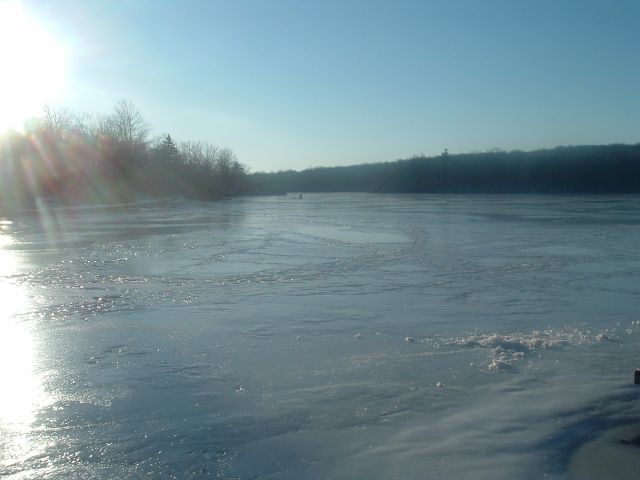 Another Tracfone coverage update, this time from the Poconos. We drove up one Sunny morning from the New Jersey border on our first day trip to the Poconos.

We stopped for lunch. Then headed on up to one of the state parks. Unfortunately I hadn't really prepared for going snow tubing so we just ended up driving through some of the State Parks until we found a frozen lake where someone in the distance was ice-fishing. Got cold awfully fast up.

The Tracfone still had a couple of bars of signal strength.

Here's a quick update showing the importance of good tracfone coverage when you are traveling . . . and lost at one o'clock in the morning!

I was driving up to New Jersey with my family to attend my brother's engagement party. I knew we weren't going to be able to leave until the evening, so I booked a hotel around 350 miles away, which would leave us with about a three hour drive the next day.

We got to our highway exit at about one o'clock in the morning. I followed the (very clear) directions I had printed out from the web and instead of arriving at a Holiday Inn Express, wound up on a dead end street cutting through two rows of the cleanest, most neatly kept trailer homes I'd ever seen!

Clearing my head, I pulled out my Tracfone to see if it had a signal. It did, thanks to great tracfone coverage.

I called up the hotel, found out that I should have taken the exit before, and that the hotel was just off the highway. The call took about one minute, and within fifteen minutes, I had turned around, got back on the highway, taken the right exit and had pulled up to the entrance of the hotel.

P.S. The hotel, too, was one of the cleanest I've seen.

How was your signal at home or while traveling?

Help to program tracfone when no land phone available

This is to tell Tracfone company that they should insist that we get service when purchasing tracfone. We wanted to purchase a phone from Walmart but …

Well. What did I expect? Coverage in NY Subways

When I bought the phone, I walked into walmart with a price in mind. Not a particular phone, just a price. I walked out with this tracfone lg420 number. …

Terrible service out in country (Bear Creek) Not rated yet
I purchased two of these phones for my husband and myself so we would not be under a contract. They are worthless for us at our home. We never have any …

While I haven't documented my coverage experience with other plans as much, I have given a general writeup for a few.

If you've ever had a Sprint phone, you will be familiar with the coverage available for Virgin Mobile.

Greatcall relies on Verizon for its Jitterbug phones.