FM Radio Cell Phones offer you the option or listening to news and talk shows as well as music. So if you need your daily fix of National Public Radio or Rush Limbaugh, you’ll be glad to know this feature is becoming available on more and more phones.

You can now also find FM radios on quite a few prepaid cell phones today. Here are a few of the first of these. 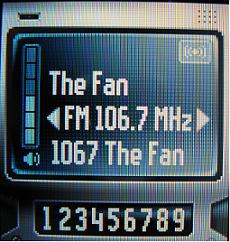 These phones from Tracfone or Net10 have an FM Radio.

The Alcatel A382's FM radio is unique because it works without requiring a set of earphones to be plugged in. I guess it has a good enough internal antenna. The A392 flip-style version of this phone is also an option.

The LG 900g has an excellent FM radio which allows you to save a large number of selection as channels.

This compact QWERTY phone has a fancy-looking radio app, but it still does the job.

These phones have not recently been offered for sale.

You can not only listen to the radio on the EX124g, but you can also schedule and record shows if you are too busy to listen to a program when it airs.

The Motorola W37xg series phones are styled after KRZR and come with a VGA camera. The W376 and W377 also offer Bluetooth headset compatibility. The W376g costs about $19.99.

This Net10 Motorola EM326g camera phone also has an MP3 player giving you the option to listen to your own music when you get tired of the radio. See my review of this prepaid slider phone.

This prepaid Nokia is a pretty but basic blue flip phone with a radio as its (only) standout feature.

The Motorola EM330 and Sony Ericsson W350 are also both camera phones with mp3 music players. They offer a few other extra features including the radio.

No Verizon Prepaid Phones with Radios?

I searched for FM radio phones on Verizon's site and found only one, the Samsung Omnia. However, it does not appear to be available under their prepaid plans.

Still, with the wide range of phones available from the other providers, you should be good.